Early start tomorrow, it’s always a bit nerve wracking leaving the boat to fly home, there’s the awful realisation when you’re on the plane, that you didn’t turn the gas off, or the seacocks are open, or the bananas you left hanging in the main cabin are going to turn into a million maggots by the time you return.
I have spent all evening trying to cover all these angles. I never do though, if only I had a way to remember what to do 😉

So today I varnished the oven handle, didn’t want to take on anything too hard. I also cleared the decks, literally, and tidied up. I sent some money off to the marina in Penang, which I owed them, and bought some juice for when we return in August.
Im travelling out of Kuala Lumpa on the first day of Eid, when fasting for Ramadan ends. It’s a major national holiday, so probably not a great day to travel on, tomorrow everyone returns home to be with family and friends, so travel is likely to be very busy, I just have to get to my hotel in KL, so it shouldn’t be too bad.

Saw this chappy this morning on the way back from the post office, he was about a foot long! 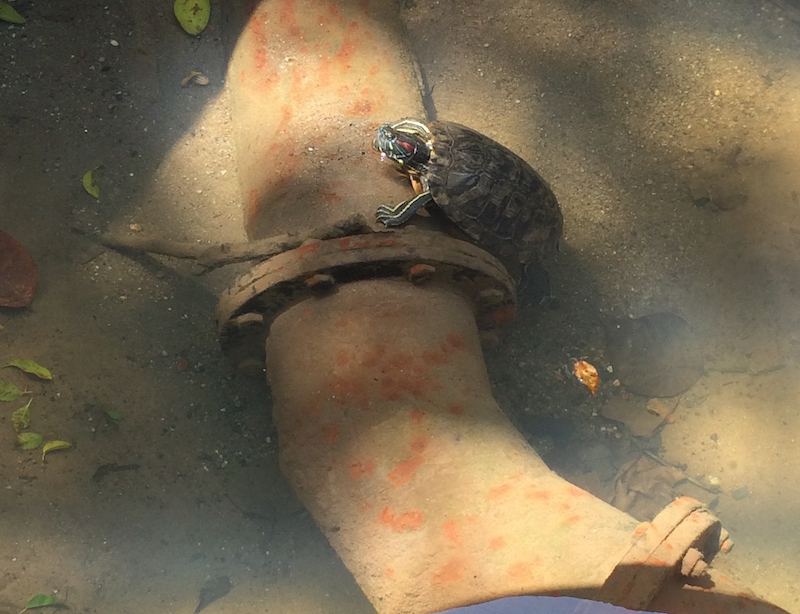 My final sunset here until our return 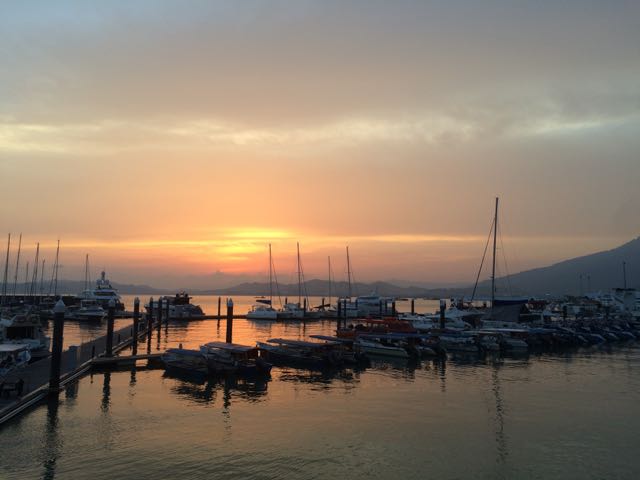 This is the Yacht club and hotel 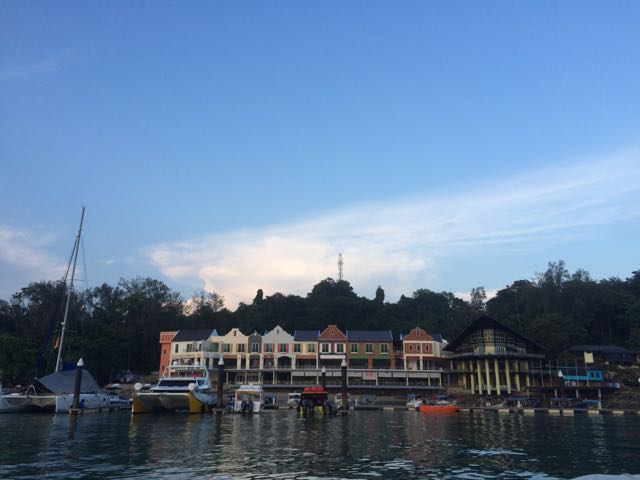 I might make a last entry from KL tomorrow, otherwise see you in August, when Kathy will probably take over the blog, so it might get a bit more entertaining, certainly it will be more legible and grammatically correct (She’s a proper proofreader )

I had a nice restful morning, eggs and toast before I started on the varnishing. Today I was doing the coachroof trim, however by 11 am the wood was so hot, I could have cooked my eggs on it, so there was no way I could put varnish down and expect it not to bubble. So I sanded the wood down ready for later when the sun went down a bit. I did a bit of tidying up and some boaty chores.

Every morning I wake up and forget to check my todo list until the end of the day, today was no exception, but at 5 pm I remembered today was really my last chance to bake bread using Tim’s recipe and his special ‘starter’ before I head home. So the first instruction was to bring the starter to room temperature for an hour. this meant the mixing and stretching business was going to seriously clash with my pool time. So I ended up rushing  parts of the process, also the lack of scales to weigh the flour had me flummoxed. Finally while the bread cooked I investigated the lack of working water gauges.
it seems the port tank is the only one wired to the display, the starboard sensor just has some wires arriving at the meter but aren’t connected, I need to think this through.
However the port tank seems to be reading 50%, on removing the sensor from the tank, it appears the float that goes up and down the tube, doesn’t float anymore. once I moved it from it’s midway position, it dropped to the bottom and wont float back. Pretty rubbish for a float I thought, perhaps they fitted a sink by mistake.
So I wired up the Starboard tank and it was reading Empty, instead of Full. The sensor seemed to be shot, but on removing it the reading changed to Full, so a bad connection was suspected. The bad connection (Actually a short caused by a bad installation) was fixed and now I have one tank reading correctly. 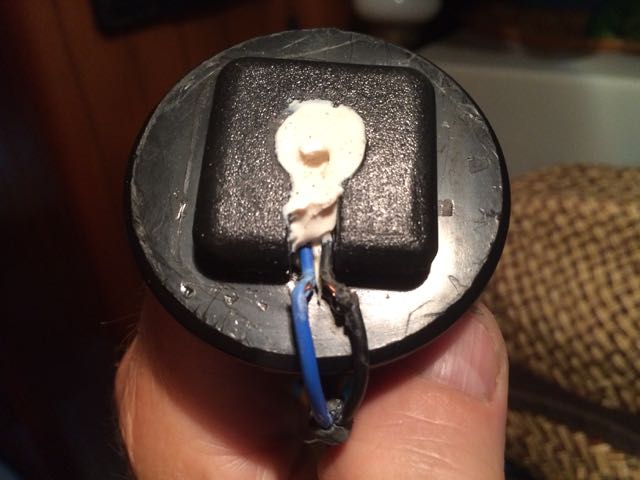 So for the next ocean crossing, we shall use the Port tank with gay abandon until it runs out, then switch to the starboard tank and keep our eyes glued to the gauge.

By now the bread was burning underneath, and anaemic on top, I gave it another 15 minutes to burn then hunger took over my logic and out it came to cool down.

And onto Sanook, this is my neighbour here in the marina 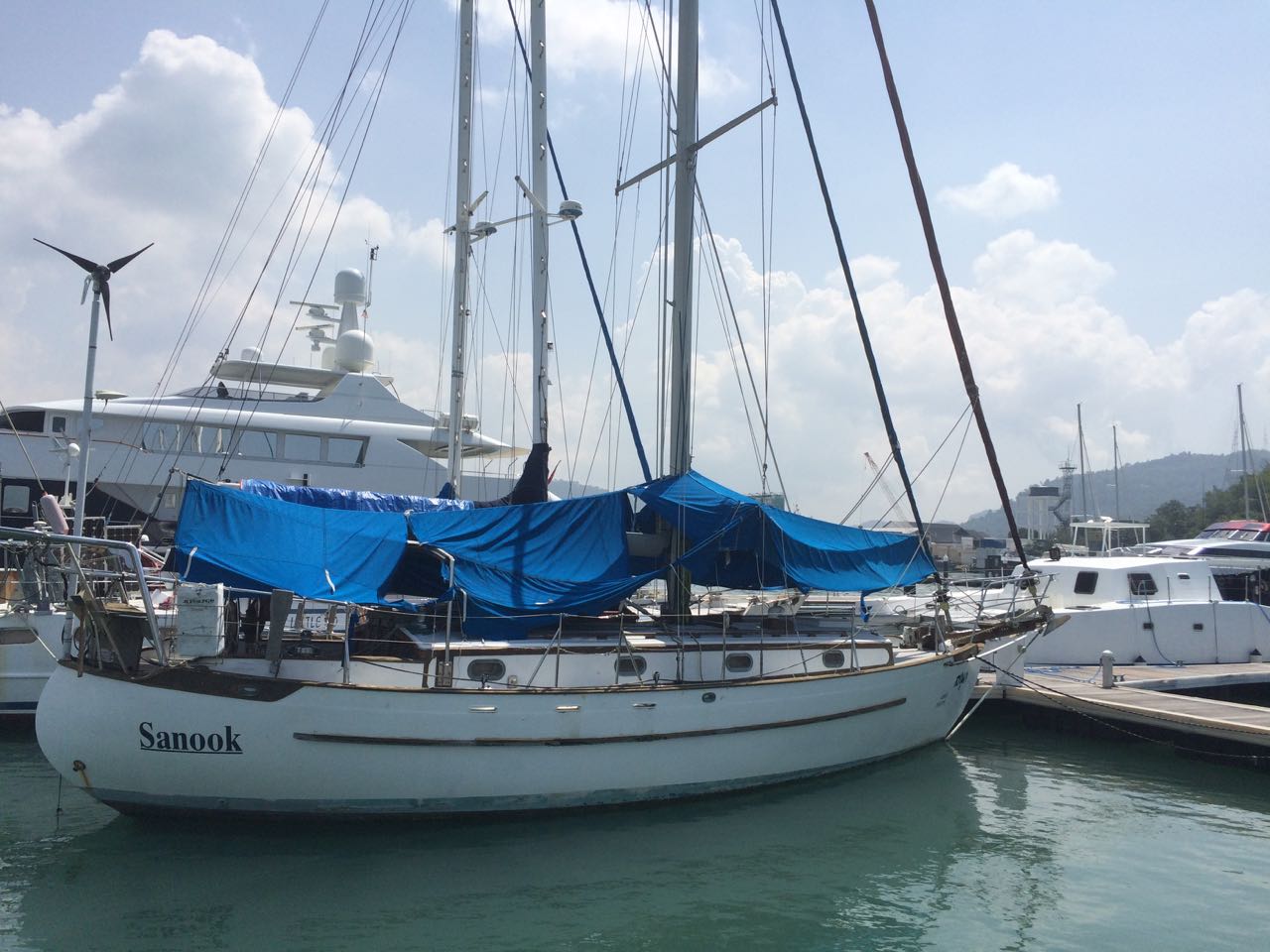 Sanook is a Tayana 37, however her hull has lost its planking effect and she’s in a rather neglected state. She is on my port side and over to starboard is a westsail32 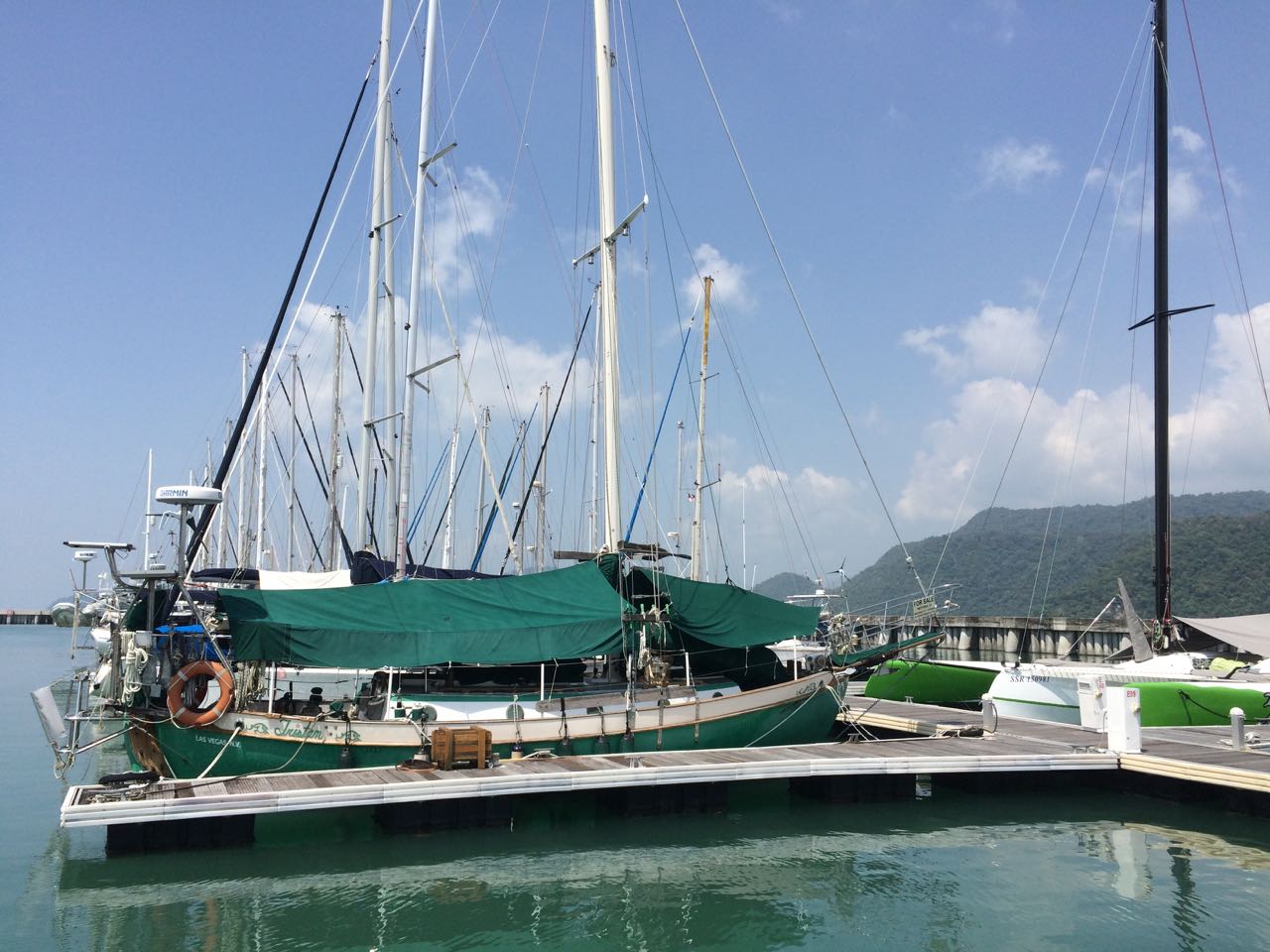 Now the westsail is one of the first double ender, Colin Archer inspired boats that took off in America. It was very successful and was one of the early cruising boats that got middle class folks out onto the water, previously the reserve of the rich or the home building types. Bob perry was commissioned to design a bigger and better westsail, he came up with the Tayana 37, which was one of the most successful blue water cruisers ever mass produced. From the Tayana 37, Bob went on to design the Baba 30, (Lady Stardust) and then the Baba 35 and Baba 40/Tashiba 40 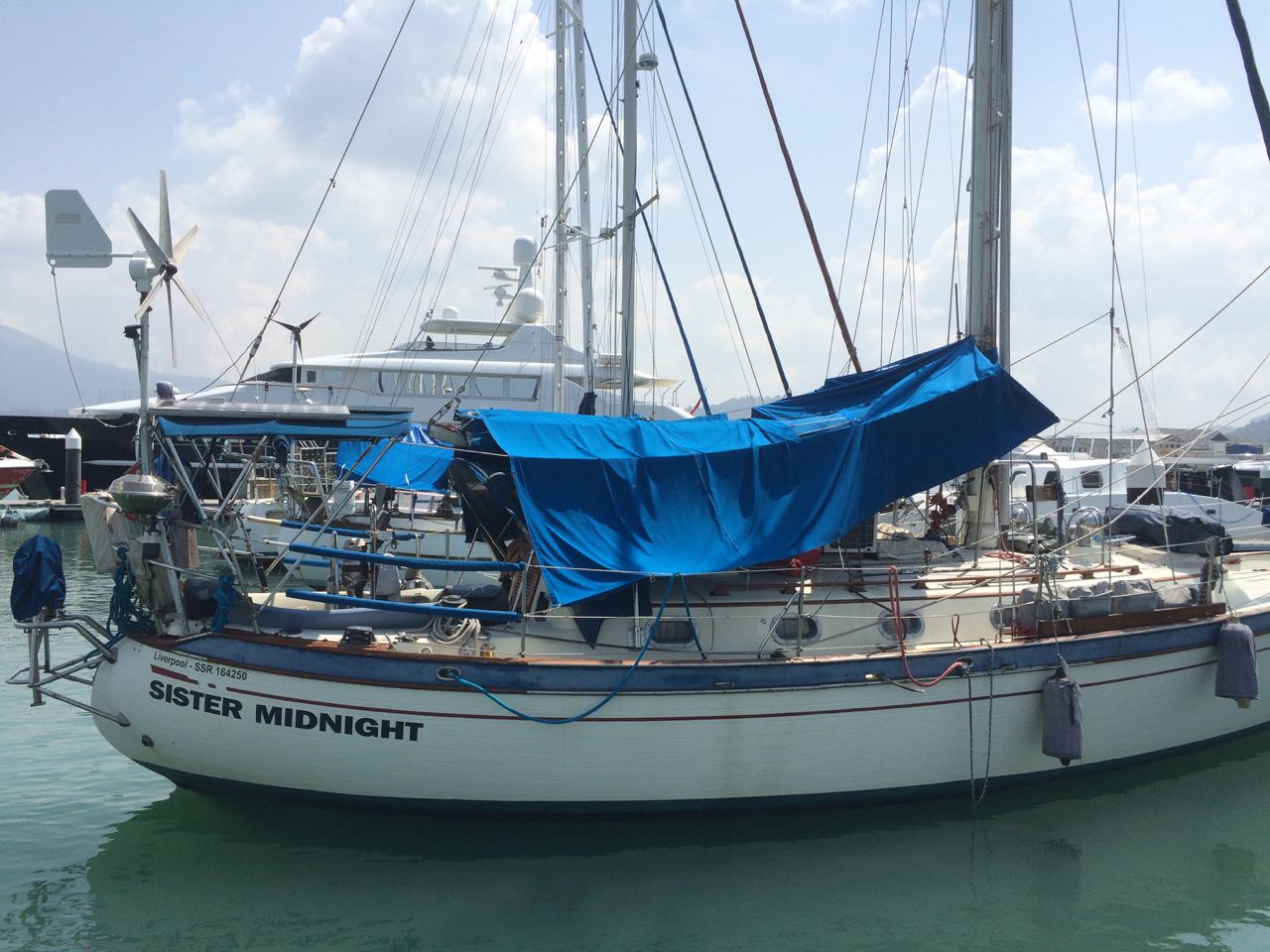 Sister Midnight is a Tashiba 40, and one of the last and most refined double ender (Canoe Stern) boats that Bob Perry designed. So within a few feet of my berth, I sort of have the whole Bob Perry history there to see.

Now if you search around a bit you will find that Sanook was sailed here by an English man who won quite a few trophies in her, racing in various regattas here. He went on to build up a little empire of Asian chandlers in Phuket and Bankok

Tomorrow is my last full day here, so a quick varnish, then a big tidy up, need to make sure there’s nothing for the bugs to live on.

I was working hard at the poolside earlier, my solataire score is very poor and I’m putting the hours in to improve it, when I heard a knocking sound above me. I looked up to see some kind of duck on the balcony above trying to get through the glass windows. 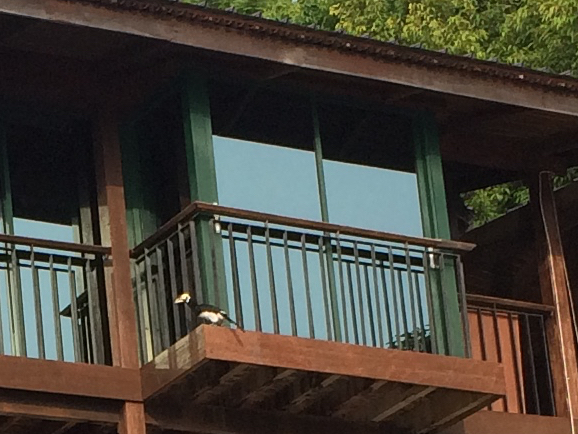 I have no idea what this is, I’m pretty sure it’s not an eagle, but it is quite big. I haven’t seen the monkeys for a few days, but I could hear them today, which was nice as I’ve been pondering on the banana peeling issue. I’m still not sure why the monkeys seem to have a better way to peel them than most of us humans. If you have no idea what Im talking about, then checkout this video on youtube. Are we able to evolve into beings that can traverse the solar system, split atoms and understand gravity (nearly), yet we missed out on how to peel a banana properly. What else have we missed!

I know what I missed, the dates I travel home, because I arrive on a Wednesday, I presumed at some point that I left on a Tuesday, but no, I leave on a Wednesday, thanks to the rotating earth thing, I leave Wednesday morning at 11AM and 19 hours later I arrive at 11PM, wish I had realised that when I booked my flight and hotel to KL from here. I was able to move the hotel back a day but had to book a second flight, still a flight to KL from here only costs £18, so not a disaster, and I get another day by the pool to work on my solataire tactics.

The anchor was “out for delivery” today, but it didn’t arrive, and the UPS site has just changed it to  “Scheduled for delivery Monday” on it’s totally useless tracking site. Still I will at least be here on Monday now, varnishing away.

The two boats to my port side have been bothering me, the first boat ‘sanook’ has a familiar look, and the boat beyond it is a rather sad rusty affair. I decided to check out the first one today and found a slightly interesting story, I will tell more tomorrow when I take a picture to explain. However suffice it to say, that as Malaysia has a very small indigenous yachting community/history, most of the boats here have travelled some way to get here. For many it’s the end of the line, as the next stop would normally be a passage to the Red Sea and onto the Med, but the Somalian pirates put an end to that for many people. I think it’s only slightly cranky people that have the kind of boats you see here, I guess I must be one of those people, I feel a bit like someone doing ‘the way’, also know as the ‘Camino de Santiago’, however I’m starting at the wrong end, and meeting everyone who has finished and is about to fly home. I wonder if Sister Midnight will end up being sold in some place like this a few years down the line and if anyone will bother to type the name into google and find out what happened.

So tomorrow isn’t about packing anymore, but more varnish. Will have a lie in and some eggs for breakfast, seen as it’s Sunday.

Just got a buzz on the phone to say Djokovic is out of Wimbledon, does that mean Andy Murray has a chance again?
What with the Brexit, the state of the Tory party, poor old Jeremy, and the sad news of Caroline Aherne, I think we must be going through some strange time/space vortex thing and everything is getting jumbled up.

I really need to learn how to paint, perhaps there is a night course I could do. I have painted a large chunk of boat and a large part of my leg, hand and neck. I have also painted parts of the boat that shouldn’t be painted, a bit of the pontoon, quite a bit of the Andaman sea, but that’s hard to be accurate about, and lots of clothes. Still Im very happy with the result, the port side is looking great, It’s the ultramarine blue strip I painted. I will get stuck into the starboard side in August.

Because of the high humidity here, I have to wait for a couple of very hot days to dry the varnish to a hard finish, otherwise I can’t sand it down ready for the next coat. also there’s the chance of trapping moisture in the varnish. 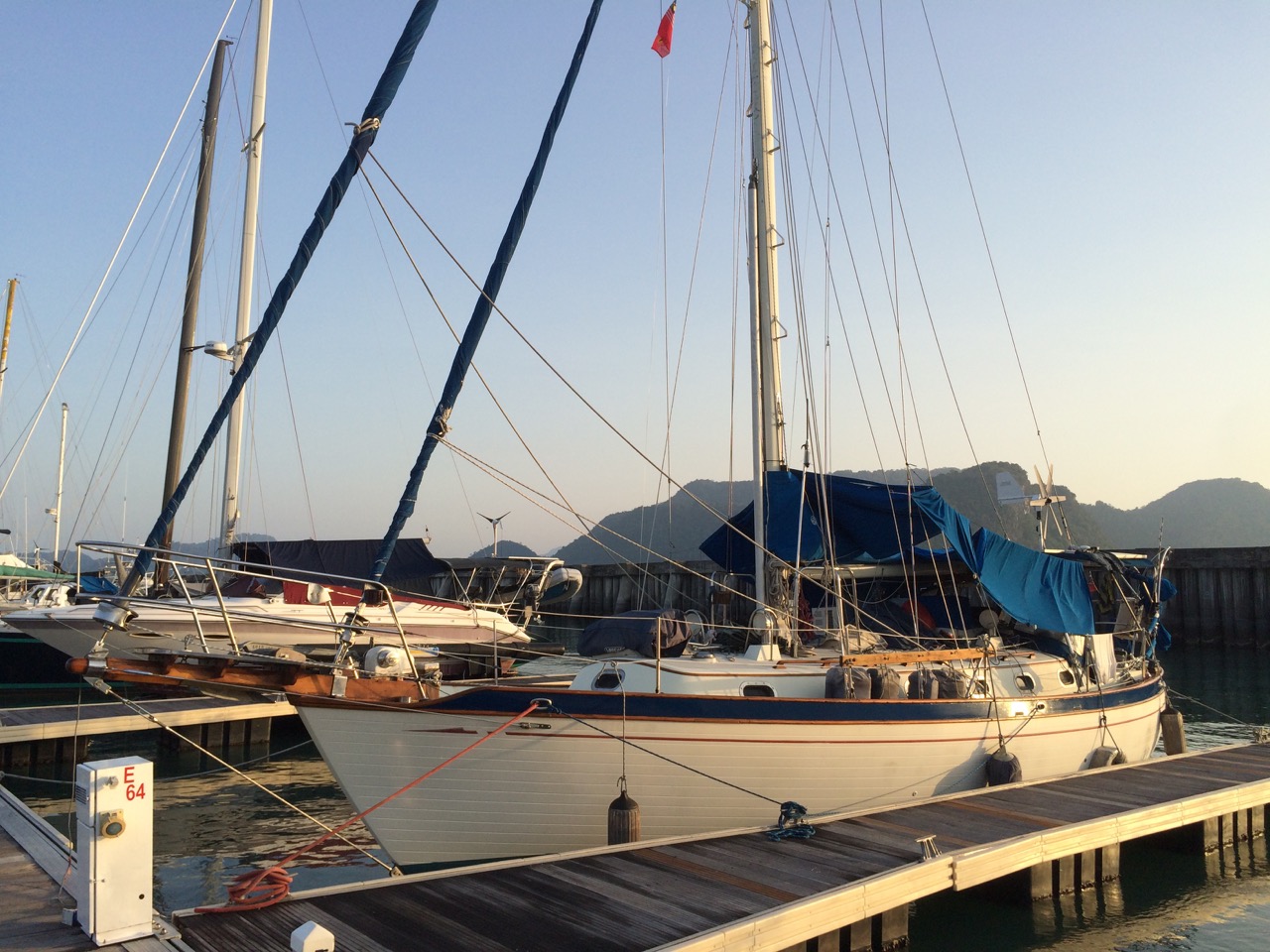 I took this picture of the cockpit from the pontoon, it’s a big cockpit, and full of junk including the life ring Tim and I picked up when out sailing. 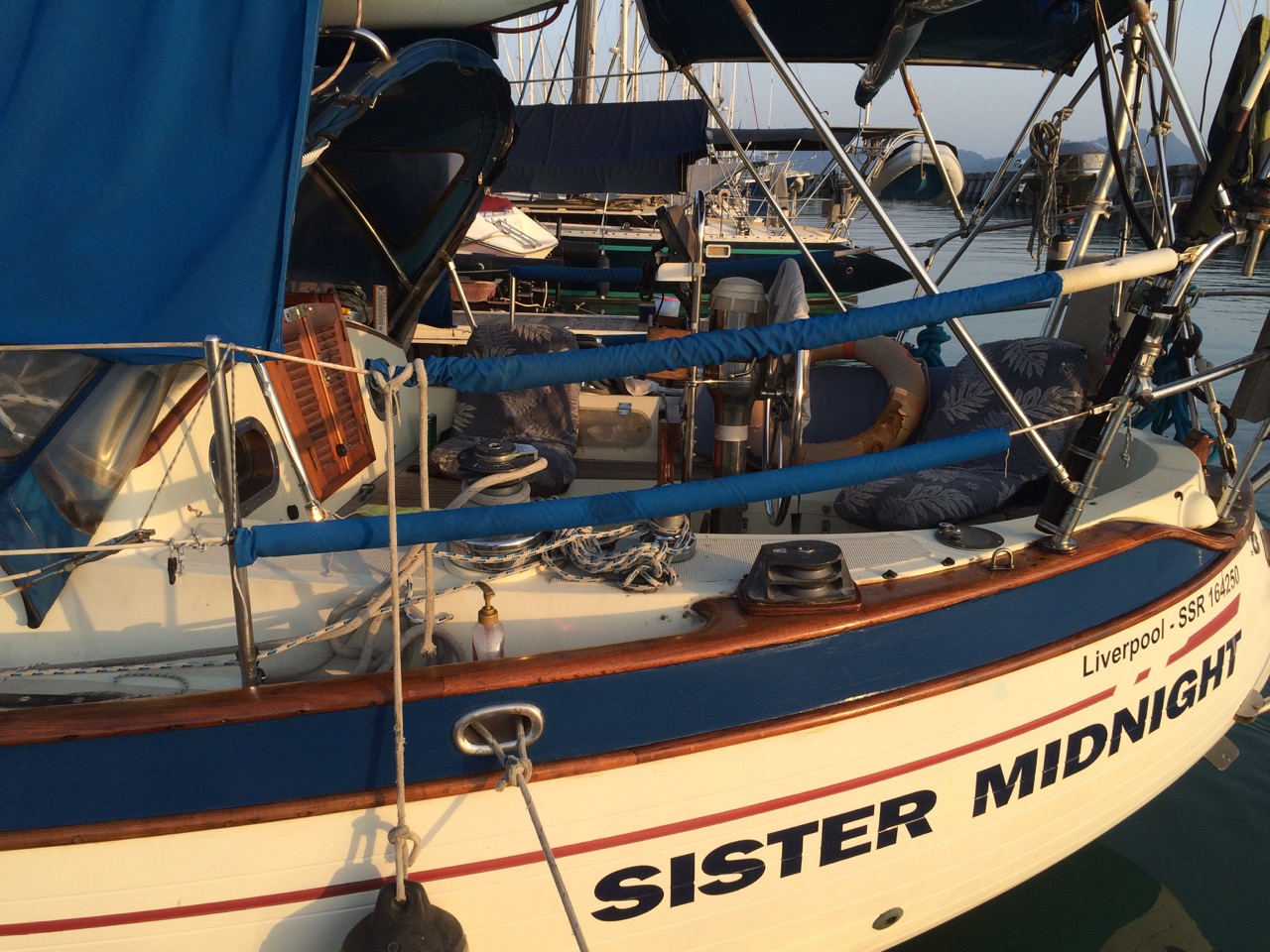 I have pretty much decided to keep the boat here for the rest of July while I travel home, this means I don’t need to worry about the trip back to Penang now, also I don’t get to use my new anchor lights or the cardboard anchor ball I made. 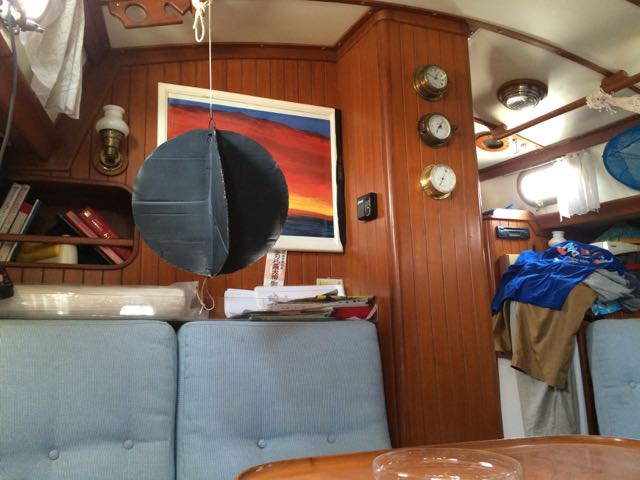 Tomorrow I’m hoping to get a final decent coat of varnish on the cap rail to protect it while I’m away, hopefully it will be dry enough by then. Also I’m expecting the anchor to be delivered, other than that, I will be starting to put the boat to bed and worrying about humidity, insect, cockroaches and leaks etc.